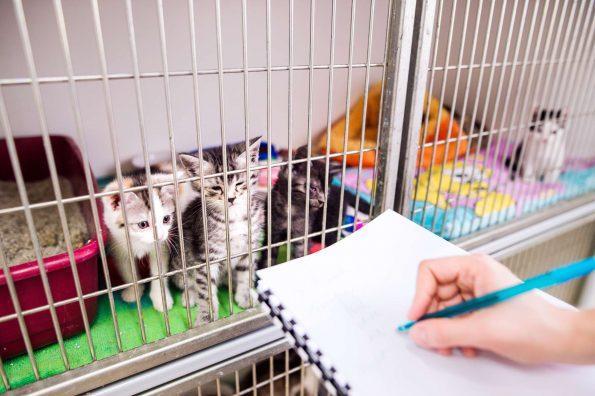 Before working at the vet clinic, I had barely any knowledge about animal healthcare. For one, I had no idea that there are other vaccines besides rabies. Yes, I’ll admit that sounds really foolish, but it’s true. I had no clue what Parvo was, I didn’t know that animals could get allergies, and I was just very uneducated about the medical field for animals.

When I was in high school, I took a class where I learned about medical terms, all of the body parts, how different substances affected your body, and loads of different subjects. I was even able to job shadow at the hospital and that was an amazing experience because I got to see how things operated first hand. So, when I started working at the vet clinic, I had a somewhat okay time understanding things. For example, one time we were talking about gastroenteritis and I remembered that “gastr/o” means stomach, “enter/o” means intestines, and “-itis” means inflammation, so “inflammation of the stomach and intestines.” And then another example, using the centrifuge was easy because I remembered learning how it worked in school, having a counterbalance and then loading the two tubes opposite each other in the machine.

But even though I had some knowledge about medical terms and such, there was still so much I didn’t know about. As I mentioned, I was unfamiliar with vaccines other than rabies, such as Bordetella, FELV, FVRCP, and DA2PP. To be honest, I even used to think that once an animal got their rabies vaccine, they were good for life. That’s how uneducated I was.

So every morning before work, I always get so excited to learn something new, whether that being learning about prescription diets, knowing which drugs can go to patients depending on their age or health, and so on. Working in such an incredible place has extended my knowledge by a vast amount and yet I still have so much to learn.

Herding Dogs – You Can’t Have Just One

Herding Dogs – You Can’t Have Just One